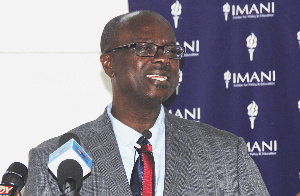 Public intellectual, Professor Stephen Kwaku Asare known widely as Kwaku Azar, has noted that the fact that the Attorney General detected loopholes in the Agyapa Royalties deal supports his view that the Government of Ghana does not need private legal firms or lawyers to advise it on transactions it enters into.

He stressed that an empowered Attorney can be the best legal adviser of government in all its dealings.

Professor Stephen Kwaku Asare had asserted that government’s use of private legal firms as transaction advisors in its dealings with companies or agreements is unacceptable since the Attorney General exists to provide such legal services, among others.

He had made the comment following revelations that the government had contracted the services of some private legal firms to advise it on the controversial Agyapa Royalties deal.

It has now come to light that the Attorney General Gloria Akuffo, had flagged aspects of the deal advising that it was not in the best interest of the country.

This, Kwaku Azar argues, confirms his assertions that government has no business paying private legal firms to be transactions advisors when the Attorney General’s Department exist as the lawyers of Government.

“…First, the Attorney General saw many of the loopholes in the Agyapa deal. This confirms my belief that we do not need these private transaction advisors and an empowered AG can be the best transaction advisor…,” he wrote on social media.

Meanwhile the Agyapa Royalties deal, which seeks to securitise Ghana’s royalties earnings for some upfront payment, continues to spark controversy. The minority in Parliament has been resolute in its opposition to the deal. Some 15 Civil Society Organizations(CSOs) have opposed the deal calling on government to suspend the deal and make some key disclosures on the deal.

General News of Saturday, 26 September 2020 Source: www.ghanaweb.com 2020-09-26 NDC Communications Director, Sammy Gyamfi In what could be described as a clash of the opinions between an expert and politicians, security expert Professor Kwesi Aning and NDC’s Sammy Gyamfi and Osei Bonsu Amoah of the NPP ‘locked horns’ during discussions on the way forward […]

President Nana Addo Dankwa Akufo-Addo says he secured funding for every project undertaken under his administration since assuming office.  President Akufo-Addo made this known at Enchi during day 2 of his 3-day tour of the Western North Region, where he cut the sod for the construction of the 71.25-kilometre Enchi to Elubo road, which will […]

World Tourism Day, will be celebrated globally under the auspices of the United Nations World Tourism Organisation (UNWTO) on September 27, 2020. This year’s theme “Tourism and Rural Development” touches on rural communities, their role and potential for tourism development. This was announced in a statement issued by the Tourism Ministry and signed by Minister […]

Chiefs in the Tain Traditional Area have hailed the significant impact of free SHS policy on their community. At a durbar of Chiefs on Thursday, September 24, 2020, in Nsawkaw, the Chiefs said free SHS has made it possible for their children to access secondary education. “The people of Tain are so grateful for your […]