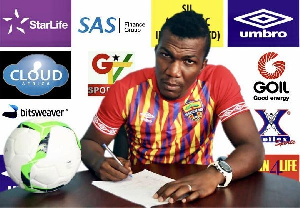 Former Accra Hearts of Oak midfielder, Lawrence Adjah Tetteh has called on fans of the club to remain faithful to the club despite the departure of talismanic forward Joseph Esso.

According to Tetteh, the Phobians have an equally good player to fill the gap left by Esso in new signing Abednego Tetteh.

Joseph Esso was released by the Phobians a fortnight ago after failing to reach a contract extension agreement with the club.

“Esso’s exit might not really affect them because they have now signed Adednego Tetteh,” said the legendary midfielder.

“I think both parties had their own reasons why an agreement cannot be reached,’he added.

“Let’s just hope the team can bounce back in the new season and win trophies. That is what the fans are expecting.” he concluded.

The Phobians signed Abednego Tetteh in the second transfer window, but the former Bechem United forward’s debut has been delayed by the outbreak of COVID-19.

Sports News of Sunday, 20 September 2020 Source: footballmadeinghana.com 2020-09-20 Kudus lasted the entire duration and was outstanding throughout the match Mohammed Kudus was voted King of the match as Ajax thumped RKC Waalwijk 3-0 in their match-week two encounter at the Johan Cruijff Arena on Sunday. It was the Ghanaian international’s first league start […]

Genoa ran riot against newly-promoted Crotone, as Davide Zappacosta and Marko Pjaca scored on their debuts, along with veterans Mattia Destro and Goran Pandev. Click here for the full match report. OR See how all today’s Serie A games unfolded on the LI…

Soccer News of Sunday, 20 September 2020 Source: 3 News 2020-09-20 The Black Stars squad The Eagles of Mali will host the Black Stars of Ghana in a friendly match on October 9, 2020 in Turkey, Mali’s football governing body, FEMAFOOT, has confirmed. The game is expected to be played behind closed doors under strict […]

Everyone knows how Andrea Pirlo played his football, but how will he set out his Juventus team? Elio Salerno looks at the tactical approach and return to 3-5-2 roots.