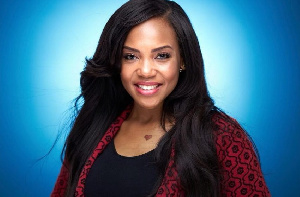 Adrienne Nicole, the woman in a leaked sex tape with Ghanaian Rapper D-Black has spoken out after the video went viral.

Adrienne Nicole is a philanthropist and American politician who lives a private quite personal life. Since the video went viral she has been devastated.

About a week ago Adrienne lost her phone at the airport while traveling.

Then a few days later on Monday September 14, 2020, Adrienne started receiving messages from an individual demanding money coupled with threats that if the money is not paid he would start posting personal pictures and videos of her and her Ghanaian celebrity ex-boyfriend.

Adrienne Nicole ignored the attempts of extortion and instead reported the matter to local authorizes. Within 48 hours the individual contacted Adrienne Nicole again demanding payment by end of day or he would start releasing videos of her and her ex-boyfriend (Ghanaian Celebrity, D-Black).

Again, Adrienne Nicole did not respond and forwarded the 2nd correspondence to authorities as well. within hours the sextape was leaked online and has since been posted and shared thousands of times across the internet.

Due to the overwhelming response to the leaked videos, she made a complaint to a cyber security team to take down the visuals from the internet. Adrienne Nicole and her team further reached out to news/media and social platforms reporting the videos and asking them to take the video down but more have popup.

Adrienne Nicole who has since went dark on social media has had this to say about the leaked video:

“I have no idea how to handle this. This feels like a crazy dream. I cannot believe someone would do this to me and my ex. There are hundreds of pictures and videos of him and I, on that phone and I don’t know what to do if more are released. Those were private moments and memories. We broke up and were taking a break but I never seen anything like this happening! This was a personal part of my life never meant to be shared with the World and I am still processing what’s happening to me right now.”

Adrienne Nicole is now working with her local and local Ghanaian authorizes to get the videos taken down and keep any more videos from being leaked.

Here is how she detailed everything in a video:

Entertainment of Saturday, 17 October 2020 Source: kingdomfmonline.com 2020-10-17 Actor, Pastor Blinks Nana Mensah widely known as Pastor Blinks has stated that any man of God who condemns his acts is a hypocrite. According to Pastor Blinks, his mandate is to expose fake pastors. “My intention for coming out with the Pastor Blinks movie is […]

Entertainment of Friday, 16 October 2020 Source: My News GH 2020-10-16 play videoActor Majid Michel Celebrated Ghanaian actor, Majid Michel, has said that the ‘dwindling’ movie industry does not need the support of the government to revitalize it because the industry was built with no support from the government. The actor who seems to have […]

The big news stories in this edition of the Eyewitness News are; 12 presidential candidates cleared to contest 2020 polls…

The President, Nana Addo Dankwa Akufo-Addo, has launched the 2017/2018 National Report of the Ghana Census of Agriculture, the first…

Oromos have complained of marginalisation but they are now increasingly assertive in their identity. Source link

Dakar, Senegal, 15 October 2020 - The Ministry of Fisheries and Maritime Economy of Senegal issued apress release on 12…

image copyrightAFPIn our series of letters from African journalists, media and communication trainer Joseph Warungu looks at why colours and…

A BBC News Arabic investigation has uncovered systemic child abuse and evidence of sexual abuse inside Islamic schools in Sudan.…

The activist is reunited with his family after spending 29 months in jail for spreading "fake news". Source link