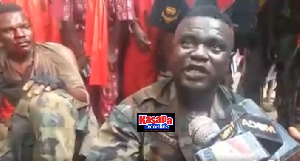 The two soldiers were from Army Headquarters and 64 Infantry Regiment

Deputy Minister of Defence, Maj. Rtd. Derrick Oduro has revealed that the two soldiers who were brutally assaulted at Dome Faase near Obom Domeabra in the Ga South Municipality by irate residents were on official duty (Operation Calm Life) patrols.

According to him, the soldiers were on a legitimate assignment and should not have been subjected to such ordeal.

The two from the Army Headquarters and the 64 Infantry Regiment were attacked at a stone quarry which is in a dispute where they were on guard duty.

Reports say the residents embarked on a demonstration to protest ongoing works on the land and ended up at the site where they began pelting stones at the soldiers and a heavy-duty machine.

The soldiers realizing their lives were in danger fired warning shots in a bid to disperse the milling crowd but they rather charged further.

They eventually succeeded in getting hold of the soldiers, beat them up, and ripped apart their uniforms as they suspected them to be land guards posing as soldiers.

Speaking to Kasapa News, Maj. Rtd. Derrick Oduro stated that the army has launched a special operation to arrest all the perpetrators of the dastardly act.

“We’ve thrown our men out there to fish out everyone who took part in the assault. There’s no hiding place for the perpetrators, the video coverage of the incident is aiding us to identify and arrest the people.”

In less than 24hours after the incident occurred, more than 50 people have been arrested by a team of military personnel who stormed the town.