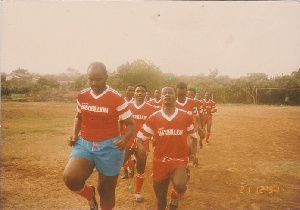 Ben Ephson was Captain of the Media XI football team

The Managing Editor of the Daily Dispatch Newspaper, Ben Ephson, has revealed that he quit playing football due to his ill health as a sickle cell (SCD) patient.

Ben Ephson stated that, he previously played together with one Joe Baah, at the third division for a team called Alabama.

“It is in Ghana that we fail to keep records, I’ve played football with one Joe Baah, who was a goalkeepers’ trainer for Kotoko. We used to play at the third Division for Alabama and our training ground was the Nima Police Station Park” he said Tuesday on Angel 102.9 FM.

He stated that he was diagnosed with sickle cell disease at age 11 and has had to rely on folic acid each day for the past 52 years without missing.

“What made me to quit [football] and subsequently put on weight is that I am a ‘sickler’. Yes, I am SC, since the age of 11,” he opened up.

His revelation came as a shock to Captain Smart, who interviewed him on the ‘Anopa Bofo’ morning show, and his morning show team on Tuesday, August 25, 2020.

The pollster added that he, together with Kweku Baako and others, used to play football with diplomats, MPs, army and police officers as a means of building bridges with these stakeholders.

Recounting his ‘football days’, he named Kwesi Prat, Kweku Baako Jnr and Kabral Blay Amihere as other members of the team called the ‘Media XI’.

According to him, Kweku Baako Jnr was so fast that he could run ahead, leaving the ball behind.

While narrating his experience, he took the opportunity to encourage persons with sickle cell to take their medication seriously in order to keep fit.

He said, “I can’t think far when people refuse to take their medications so they can get well”.

Romaâs search for a director of sport continues, sources tell Football Italia, as Michael Emenalo and Jonas Boldt are not in the running. There had been reports in the Corriere dello Sport yesterday that former Chelsea chief Emenalo was a strong candidate…

Ronald Koeman admits Barcelona put in âthe best performance of the seasonâ to beat Juventus 2-0 in Turin and explains his surprise picks. Ousmane Dembele opened the scoring early on with an effort deflected off Federico Chiesa, then Lionel Messi convert…

Inter defender Milan Skriniar has returned to Italy after 21 days in quarantine, but will most likely sit out on Saturday against Parma. Sky Sport Italia reveals the Slovakia defender has returned to Milan and is currently waiting for the results from the r…