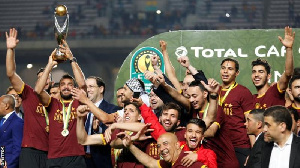 Esperance have been confirmed winners of the 2018/19 CAF Champions League by the Court of Arbitration for Sport (CAS).

This was after the adjudication body dismissed an appeal by Wydad Casablanca who boycotted the final due to VAR hitch.

”The CAS has dismissed the appeal and confirmed the decision of the CAF Appeals Board in full,” a statement read.

Wydad Casablanca refused to play on after having a goal disallowed and then walked off the pitch when the decision was not referred to the Video Assistant Referee (VAR).

However, referee Bakary Gassama disallowed the goal due to an infringement in the build-up and opted not to consult the VAR to check the decision.

That led to a stoppage as the Moroccan club’s players protested, with their reserves and coaching staff storming onto the pitch to harangue the referee.

Paulo Dybala could once again start from the bench in Juventusâ Champions League clash against Dynamo Kiev on Tuesday, reports in Italy claim. The Argentinean wasnât happy for not being involved at all in the Old Ladyâs 1-1 draw at Crotone at the week…

Juventus have âprecautionarily decided to temporarily suspend the activity of the youth sectorâ following some cases of Covid-19 among their academy players.

Sports News of Monday, 19 October 2020 Source: footballghana.com 2020-10-19 Ghana international Mohammed Kudus Editor of outlet Ajax Showtime, Gino Haverkamp has reacted to Ajax’s victory against SC Heerenveen. Accoridjng to Gino Haverkamp, Mohammed Kudus should always play when he is fit. The Ghana international who scored and provided a brace of assists for the […]

Borussia MÃ¶nchengladbach coach Marco Rose expected tough games in the Champions League and insisted the Germans âaim to advanceâ ahead of the match against Inter.

Oromos have complained of marginalisation but they are now increasingly assertive in their identity. Source link

Dakar, Senegal, 15 October 2020 - The Ministry of Fisheries and Maritime Economy of Senegal issued apress release on 12…

image copyrightAFPIn our series of letters from African journalists, media and communication trainer Joseph Warungu looks at why colours and…

A BBC News Arabic investigation has uncovered systemic child abuse and evidence of sexual abuse inside Islamic schools in Sudan.…

The activist is reunited with his family after spending 29 months in jail for spreading "fake news". Source link