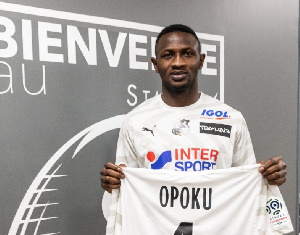 French Ligue 2 side Amiens SC are on the verge of re-signing Ghana defender Nicholas Opoku, GHANASoccernet.com can exclusively confirm.

Opoku joined the Unicorns on loan in a deal worth €500,000 during the January transfer window.

It was stipulated in the deal that the Unicorns will sign the Ghana international permanently for €5 million should they avoid relegation.

His efforts were however not enough as Amiens finished 19th in the abruptly-ended Ligue 1 season with 23 points after 28 games.

The 22-year-old returned to his parent club Udinese following the expiration of his contract with the French outfit.

But Ghana’s leading football portal, GHANASoccernet.com can authoritatively confirm that the former Berekum Chelsea guardsman is returning to the Stade de la Licorne in the coming days.

After long negotiations, and despite competition from Ligue 1 outfit FC Metz, Amiens have won the race for the player’s signature.

He completed a mandatory medical test on Thursday morning, but there are still some details to work out with his agent.

Opoku could make his second debut for the club in the away encounter against Le Havre on Saturday.

He made seven appearances for Amiens, playing for the entire 90 minutes in all of them.