The seven-track EP features other great talents like Toy Boi, Nobody, and others.

Some of the tracks on the EP include ‘Mini Waa’ which he featured Nobody and ‘We No Finish’ also featuring Toy Boi. 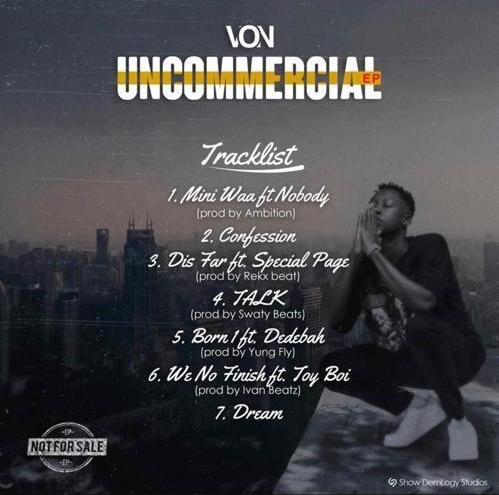 The EP will be on all major online streaming platforms including Apple Music and Spotify.

The ‘Twerk’ hitmaker was formerly of Ruff Money Records where he released his ‘Twerk’ song and a couple of freestyles.

He joined the label in 2016 and opted out this year.

Aguero’s equaliser for City was his first goal since January and his 40th in the Champions LeagueManchester City made a winning start to their 10th attempt at winning the Champions League after fighting back to beat Porto.The Portuguese champions took a surprise early lead but Sergio Aguero quickly levelled from the spot and second-half goals…

How it started: Aguero (r) celebrates with Luis Garcia after scoring his first Champions League goal, which came for Atletico Madrid against PSV in September 2008 when he was 20Another match for Manchester City striker Sergio Aguero, another goalscoring milestone to celebrate.When the 32-year-old Argentina striker found the net with a penalty in Wednesday’s 3-1…

Soccer News of Thursday, 22 October 2020 Source: Ghana Soccernet 2020-10-22 The player altered his birth date, which from his previous club was 20th May, 1998 A former Okwahu United player, Felix Oppong has been banned and fines GH¢500 for falsifying documents in his application for free agency at the Player Status Committee.  The player […]