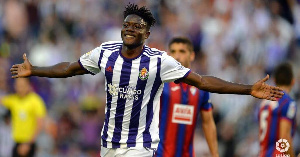 Mohamed Salisuh has been snapped up by English Premier League outfit Southampton for a £10.9m fee

Director of the African Talent Football Academy Fran Castano has said that he almost gave up on Ghanaian defender Mohammed Salisu.

Mohammed Salisu is one of the best performing young defenders in World football, having impressed on his debut with Real Valladolid in the Spanish La Liga and got nominated into the U-21 team as well as the breakthrough team of the 2019/2020 season.

The 21-year-old Ghanaian defender has been snapped up by English Premier League outfit Southampton for a £10.9m fee.

However, Mohammed Salisu struggled at the early stages of his career and he was also kicked out according to the director of his former academy.

“I was about to kick him out,” the Director of the African Talent Football Academy said in an interview with Sky Sports.

“But he caught my attention within 10 minutes. Salisu is special. Off the pitch, he was quiet and calm. He liked being alone or with three or four of his closest friends. He was very shy.

“On the pitch, everything changed. Character, aggression and leadership.

“He always wanted to win and he was capable of forgetting bad moments very quickly.

“His rapid rise has not been easy, but he has a very strong personality and knows what he wants.” He added.

Project execution is a permanent and important feature and responsibility of every government. Here in Ghana, all our governments undertake some form of projects in most parts of the country. These projects are mostly in the form of roads, school infrastructure, water, KVIPs, health infrastructure, airports, and harbours to mention but a few. Whereas these […]

The President, Nana Addo Dankwa Akufo-Addo has announced that Ghana’s Premier League and Division One Football League will resume on Friday, October 30, 2020. President Akufo-Addo made this known on Sunday, September 20, 2020, during his 17th address to the nation on the measures taken by the government to contain the COVID-19 pandemic. In making […]

A Ghanaian Environmentalist, Chibeze Ezekiel has been appointed to the Panel of International Experts on the Environment of Peace 2022 (EP2022) project. The Executive Coordinator of the Strategic Youth Network for Development (SYND) will serve as a panel member. The EP2022 project is an ambitious new initiative that aims to increase global understanding of the […]