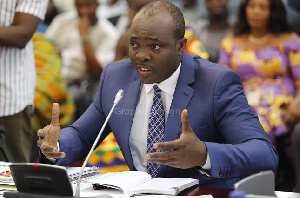 Former Ghana midfielder Mohammed Polo has argued that Isaac Asiamah is doing a better job as a Sports Minister in comparison to Nii Lante Vanderpuye.

Nii Lante Vanderpuye, long-serving Member of Parliament for Odododiodo constituency was heavily criticized for his friction with the Kwesi Nyantakyi-led GFA which many believe was the chief reason the country failed to book a spot in the 2018 FIFA World Cup.

Last month, Nii Lante remarked that President Akufo-Addo has a bad choice as Sports Minister, highlighting the challenges the sector is facing under the leadership of Hon. Isaac Asiamah.

But Polo has laughed off the former sports broadcaster’s remarks, insisting Isaac Asiamah is doing far better in his position as Sports Minister as compared to the former.

“I am struggling to see what Nii Lante did during his tenure as Sports Minister.”

“At least I have seen development and upgrading of sports infrastructure since Asiamah took over.”

“If you say Nii Lante brought structural reforms, what was the end product?”

“For me because of the infrastructure, I will go for Asiamah,” Polo remarked on Akoma FM.

Asiamah has been in charge since the New Patriotic Party (NPP) took office in 2017. He is the longest-serving sports minister since 2001. Under his watch, the Accra Sports Stadium has been renovated with Baba Yara Stadium currently undergoing renovation.

Juventus coach Andrea Pirlo waits for Cristiano Ronaldoâs test results and said he will âcount on the players available to sacrifice themselvesâ against Barcelona.

It was a six-goal thriller at San Siro on Monday night, as Milan dropped points for the first time this season, but both they are Roma were overshadowed by the referee.

Milan defender Simon Kjaer âfeels a responsibilityâ at Milan and suggests his compatriot Christian Eriksen should âplay in his position.’ The Danish centre-back is one of the most experienced players in the Rossoneri dressing room and he is feeling th…

An independent parliamentary candidate in the Sunyani West constituency of the Bono Region, Bernard Oduro Takyi says he is unperturbed…

Reaffirming its commitment to education and skills development, Absa Bank Ghana in partnership with student-focused organisation, Enactus Ghana has begun…