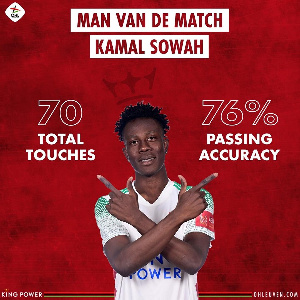 Ghanaian youngster Kamaldeen Sowah continues to impress in his first season in the Belgium Jupiler Pro League after starring for OH Leuven in their defeat to Charleroi.

The Leicester City owned winger helped the club gain promotion to the topflight and has been instrumental since the start of the new season.

The winger created Leuven’s only goal in the 3-1 defeat on Saturday, after racing through from the left to set up Xavier Mercier for the equalizer on 34 minutes.

Sowah was named man of the match after making an assist in a game he had 76% passing accuracy.

Charleroi took an early lead through Dorian Dessoleil, just six minutes after the start of the game.

The visitors repeated the same their quick start in the second half with Mamadou Fall putting them in the lead once again just four minutes into the second stanza.

Kaveh Razael finished off the home-side with ten minutes remaining.

Sports News of Monday, 21 September 2020 Source: footballghana.com 2020-09-21 Ghana international Jeremie Frimpong Celtic right-back, Jeremie Frimpong has stated that he and his teammates are aiming to stay on top of the league after recording a 3-2 win against Livingston. He added that he expects his side to extend their winning run in the […]