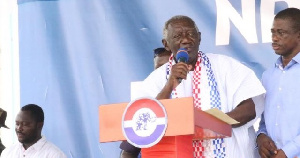 “Everything considered…I will give them 70%,” he explained.

The former President believes the sound economic policies by the NPP alone should be enough to fight corruption in the country.

The NPP on Saturday launched its 2020 manifesto in the Central Region capital, Cape Coast, with a promise of several policies to be implemented should they win the 2020 elections.

Reacting to the policies that were outlined in the manifesto on Onua TV’s Maakye on Monday, August 24, the former president said “the free school and free water and electricity” alone should help fight corruption in the country.

He said in Twi that “the economy was bad when they took over from [John Dramani] Mahama but when you look at the performance so far, with the creation of the new regions; Ghana is better placed for development”.

Former President Kufour noted that “with the Covid-19 pandemic and how it has been managed…look at other countries like China, US, UK, and other big nations were scattered…but Akufo-Addo and his government has been able to manage it well and that leadership”.

He said: “I look at Akufo-Addo and asked, have you been given an injection to perform this way? Because looking at the development, it is marvelous”.

Mr. Kufour said “these good policies are helping because they did not meet money but they have made the market very positive for every Ghanaian”.

On fighting corruption in the country, the former president said several policies should be taken into consideration.

“The accuser needs to be charged. The police will come in. The courts will come in. Judges and lawyers as well because we have laws in this country and all these should be taken into account”.

He said “if all the institutions such as police and courts are working, then we will not have challenges in fighting corruption”.

“We should consider all these when talking about corruption; else it will not be difficult to uproot corruption. I fought corruption.”

Government has assured of footing the medical bills of the victims of the Akim Batabi building collapse disaster, Vice President Bawumia has announced. The families of the disaster will also receive some financial assistance to help them go through these trying times. The Vice President, who handed over an initial GHS200,000 to the families on […]

Constituents of Asawase in the Ashanti Region have questioned the continuous tagging of the area as a hotspot for election violence. According to them, although the area often records some disturbances during electoral activities, it is entirely not the case that they are violent as has been suggested. Recent figures released by the Ghana Police […]

An independent parliamentary candidate in the Sunyani West constituency of the Bono Region, Bernard Oduro Takyi says he is unperturbed…

Reaffirming its commitment to education and skills development, Absa Bank Ghana in partnership with student-focused organisation, Enactus Ghana has begun…