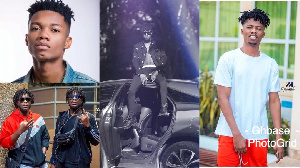 Kuame Uegene, Kidi, Dopenation and Kwesi Arthur were among the big winners of the night

The 21st edition of the Vodafone Ghana Music Awards (VGMA) came off over the weekend to reward entertainment players in Ghana for their hard work and drive to push the local music to the top.

Although the music festival was highly smooth and successful, there had arisen some controversies about some awards and their winners.

According to rants by some fans, some artistes did not deserve to win certain awards because there were better people who should have won it.

Best Rapper Of The Year

Album Of The Year

KiDi’s Sugar album won the Album Of The Year category beating completion from King Promise’s ‘As Promised Album, Sarkodie’s ‘Black Love’ album, Okyeame Kwame’s ‘Made In Ghana’ album, Joe Mettle’s ‘Wind Of Revival’ album, Nacee’s ‘Time With God’ album and Kwesi Arthur’s ‘Live From Nkrumah Krom 2’ Album. Popular opinion had it that Sarkodie was deserving of the award than any other person.

Afrobeats Song Of The Year

DopeNation’s ‘Zanku’ was voted as the Afrobeats Song Of The Year’ album beating competition from Wendy Shay, King Promise, E.L, Kelvynboy, KiDi, Kwesi Arthur, Guilty Beats and Darkovibes. Fans believe Kelvynboy, Kwesi Arthur or Kidi should have won this category since their songs were more viral and relevant than ‘Zanku.’

Artiste Of The Year

The has been a huge uproar that has greeted the announcement of Kuami Eugene as the winner of this category especially when he faced competition from the likes of Kofi Kinaata, Diana Hamilton, Sarkodie, and Medikal. Many believe the critical analysis of the year under review and the work done by these artistes would point to the fact that Kuami Eugene does not deserve the award. Many argue that Kofi Kinaata or Sarkodie should have won this category because they have done pretty better than Kuami Eugene. Others think the other artistes have been cheated or Charterhouse was bribed to present this award to Kuami Eugene who even upon receiving it said ‘I was not expecting it.’

In all, just like any award scheme, there will surely be people who would feel cheated or betrayed or better still denied what they deserved. The conversation surrounding the entire VGMA 2020 has begun and the arguments will continue until nothing is left to be said.

However, congratulations to all who won and better luck to those who weren’t lucky enough to win it irrespective of how deserving they were.

Entertainment of Wednesday, 16 September 2020 Source: Sammy Kay Media 2020-09-16 Wendy Shay Click to read all about coronavirus → Self-acclaimed “Queen of Ghana music” Wendy Shay has slammed critics and haters by stating that people who look like insults always insult her. In a post sighted by sammykaymedia.com on her twitter handle, the Rufftown […]

Entertainment of Tuesday, 15 September 2020 Source: angelonline.com.gh 2020-09-15 File: The site for the Film village at Kunsu was a gift from husband of actress Mercy Asiedu Click to read all about coronavirus → Some members of the Film Producers Association of Ghana (FIPAG) in Kumasi have threatened to embark on series of demonstrations against […]

image copyrightGetty Imagesimage captionThe incident happened in the Chadian capital, N'DjamenaA court hearing in Chad descended into chaos when the…

Code-switching is a term widely used to describe when somebody changes their accent, tone of voice and mannerisms depending on…