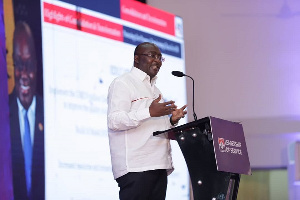 Kojo Oppong-Nkrumah, the Minister for Information, has admitted that there were errors in the NPP administration’s presentation on infrastructural projects it has built since they assumed office in January 2017.

He indicated, the inclusion of an AstroTurf purportedly built by this NPP administration in Adentan, a suburb of Accra, is an error from the team in charge of verifying the projects, who might have overlooked it during their checks.

This, he said, has caused what has been described as ‘ghost’ projects listed on the delivery tracker website.

“Well, MMDCEs forward the dataset in…it turns out that it was inaccurate. Verifications were done and I’m sure they missed it,” he said on PM Express on the Joy News channel on Monday.

Despite some of the errors, the minister maintained, the Akufo-Addo administration had done better with its almost four-year mandate.

“Even if you took out that one or give or take the 26 that our colleagues in the NDC say that they had a challenge with, some of which I have seen tonight [and] even online, people go back to those places and say that ‘but that can’t be true’. We see these projects and put some of the videos online.

“The challenge has been to the colleagues on the other side to produce a database of how many projects they have done so that you can do the comparisons,” he said.

Oppong-Nkrumah averred that the total number of projects disputed by the opposition is only a small fraction of the verified ones.

“I am saying even if you discount 334, that is 17,000 infrastructure projects still out there,” he stressed.

According to him, it was a deliberate attempt by Dr Bawumia together with President Nana Akufo-Addo, to distort the facts.