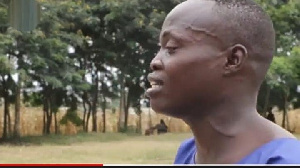 A photo of Sumaila

A middle-aged man whose name has been given as Sumaila is reported to have invoked curses on a judge for sentencing him to five years imprisonment with hard labour to a crime he claimed he was innocent of and was slapped with two more years.

Initially, Sumaila was sentenced to five years imprisonment for stealing but Sumaila’s curses which infuriated the trial Judge earned him an extra two years jail term from the Judge whose name was not given.

Crime Check, an entity that fights for innocent persons who are convicted wrongly said Sumaila cursed the Judge that he will be sacked.

The Judge according to reports, later got sacked from his position as a result of Anas’ Aremeyaw Anas expose on the Judiciary corruption in which he was captured.

Sumaila according to Ibrahim Kwarteng who Heads Crime Check Foundation, has since served his full term and was released only last week.

It would be recalled that about Twenty Magistrates and Circuit Court judges implicated in the judicial corruption scandal in 2015 were sacked.

The judges, who were part of the 34 implicated in the exposé done by ace investigative journalist Anas Aremeyaw Anas, were dismissed for violating provisions of the 1992 Constitution, according to the Committee set up to investigate Anas’s claims.

Some of them were sacked with benefits while others got dismissed without their benefits.

After strongly protesting his innocence in court, Sumaila could not believe it when he was sentenced to five years in prison in hard labour.

He cursed the judge and was given two years additional sentence. Sumaila was wrong in insulting the judge but was it necessary for the judge to have added two more years to Sumaila’s sentence?

In cursing the judge, Sumaila said the judge will be sacked one day. Strangely, he got sacked in the Anas expose’. Will you call it a coincidence or a reflection of Sumaila’s curse?

After strongly protesting his innocence in court, Sumaila could not believe it when he was sentenced to five years in.

General News of Saturday, 26 September 2020 Source: www.ghanaweb.com 2020-09-26 NDC Communications Director, Sammy Gyamfi In what could be described as a clash of the opinions between an expert and politicians, security expert Professor Kwesi Aning and NDC’s Sammy Gyamfi and Osei Bonsu Amoah of the NPP ‘locked horns’ during discussions on the way forward […]

President Nana Addo Dankwa Akufo-Addo says he secured funding for every project undertaken under his administration since assuming office.  President Akufo-Addo made this known at Enchi during day 2 of his 3-day tour of the Western North Region, where he cut the sod for the construction of the 71.25-kilometre Enchi to Elubo road, which will […]

World Tourism Day, will be celebrated globally under the auspices of the United Nations World Tourism Organisation (UNWTO) on September 27, 2020. This year’s theme “Tourism and Rural Development” touches on rural communities, their role and potential for tourism development. This was announced in a statement issued by the Tourism Ministry and signed by Minister […]