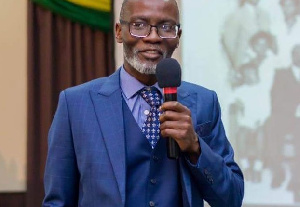 A member of the New Patriotic Party (NPP) Gabby Asare Otchere-Darko has said the killing of the Mfantseman Member of Parliament, Ekow Quansah Hayford should not be seen as politically motivated unless and until proven otherwise.

He said the act should be treated purely as a crime.

In a tweet on Saturday October 17, the former Executive Director of the Danquah Institute said “It appears there was no political motive behind the murder of the MP.

“Let’s treat it for what it is and let’s stop the conspiracy theories – unless and until proven otherwise. Crime is crime. Murder is murder. Not everything should be seen as NPP vs NDC.”

The lawmaker was killed by suspected armed robbers on his way back from a campaign trip to Abeadze Dominase on Friday October 9.

He had visited the town barely hours after filing his nomination for re-election in the December 7 parliamentary elections.

Meanwhile five persons have been arrested by the Ghana Police Service.

The five are being taken through lawful police procedures, the police announced on Friday, October 16.

“Five persons have been arrested in connection with the murder of the Member of Parliament for Mfantsiman Constituency, Hon. Ekow Quansah Hayford.

“They are being taken through lawful Police procedures. Further updates will be given in due time,” the Police announced in a statement.

Gunmen have stormed a private school in a restive area of Cameroon killing at least six children and wounding a dozen others, officials say. Officials in the south-western city of Kumba blamed Anglophone secessionists for the attack. This has not been independently confirmed. A local education official said the victims were aged between 12 and […]

A Cape Coast Circuit Court Judge, Dorinda Arthur Smith, wished a 60-year old man she sentenced to 21 years imprisonment in hard labour, death in prison for defiling his two-year-old granddaughter. Mrs Smith described the act as “vicious” saying the convict could not show sympathy to the survivor at that tender age. The convict, Kofi […]

A police officer has died after being run over by a truck at a police checkpoint near Apam in the Central Region. The incident occurred on October 24. 2020, around 10:30 pm. The truck was moving from Mankessim towards Apam with two persons on board. On reaching a section of the road, the truck driver, […]