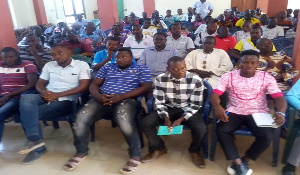 Party members were urged to commit extra task towards the elections

Team members leading the NPP 2020 electioneering campaigns have been urged to rededicate themselves and show greater commitment to enable them to win more votes for the party.

Mr Kwame Adom Appiah, Deputy Ashanti Regional Secretary of the NPP, who made the call, said the government had done a lot in its first term to improve the living conditions of Ghanaians.

Sadly, these things could not speak for themselves, unless members of the party embark on vigorous campaigns in communities and homes to tell the people of what had been achieved to enable them to appreciate and retain the party in power.

Mr Adom Appiah was inaugurating the Afigya-Kwabre South constituency campaign team for the 2020 elections at Kodie.

The team, which is led by the constituency chairman, Odeneho Kwaku Appiah, included all constituency executives, electoral area coordinators, polling station executives, and others selected to perform specific duties in the campaign exercise.

Mr Adom Appiah said the Ashanti region, which was considered to be the stronghold of the NPP needed over 90 percent of the total votes that would be cast on December 07, this year.

This placed an onerous task on every member of the party to commit to work extra hard to sell the good works of the party in its first term as well as the manifesto for the 2020 elections to the people.

Mr Adom Appiah said the longer stay of the NPP in power was the surest way to develop and implement initiatives that would empower the people and transform the country to the desired state for the benefit of all.

He urged the team members to work with every member of the party and move from house-to-house in all the communities to win souls.

Mr Christian Adu Poku, District Chief Executive, said the district had had its fair share of development projects in all sectors.

He said there was massive road construction work currently going on to open up the communities and improve access.

Odeneho Kwaku Appiah, said the Afigya-Kwabre South, which had been a pacesetter, had no excuse to disappoint the party in this election.

He said though the task of obtaining 90 percent votes was onerous, with greater commitment, hard work, and dedication, members of the party would be able to do it as they did in the 2016 elections.

Odeneho Appiah urged members of the campaign team to thoroughly study the 2020 manifesto to enable them to explain the content vividly to the people.

They should also keep themselves abreast with the achievements of the government in its first term to counter the falsehood and propaganda by its political opponents.

He said the campaign would be launched in all electoral areas to bring the campaigns to the doorsteps of the people and ensure the inclusiveness of all party members in the exercise.

Sports News of Wednesday, 23 September 2020 Source: goal.com 2020-09-23 Chelsea winger Callum Hudson-Odoi Callum Hudson-Odoi’s season has begun as last season finished – watching on from the sidelines as others become protagonists in Chelsea’s attack. This is not what the youngster envisaged when he signed his lucrative new five-year contract with the Blues almost […]

For those who have been itching hear the soothing voice of singer, Irene Logan, the wait is over as she gets featured on a gospel album. Irene Logan has been featured on Eric Jeshrun’s ‘Healing Stream’ album with a song titled ‘Satisfy’ which was produced by P. Indeed, she proved her loved ones right that […]

The Africa Centres for Disease Control (CDC) has said public health initiatives on the continent have led to a drop in new coronavirus cases. The centres’ director, John Nkengasong, told the BBC’s Newsday programme that testing, contact tracing and wearing of face masks had helped curb the pandemic. The World Health Organization (WHO) had previously […]

A protester was killed and others injured in Cameroon during anti-government protests held across the country on Tuesday, according to the opposition party’s lawyer. The lawyer, Robert Amsterdam, tweeted a video of a protester lying motionless. He wrote: “We are receiving reports that at least one protester has been shot and killed by police in […]

A growing insurgency has been ravaging large areas of northern Mozambique.Both the Islamist insurgents, who have pledged allegiance to the…

Related TopicsMali coupimage copyrightAFPA month after the coup in Mali, the military leaders remain firmly committed to the fight against…