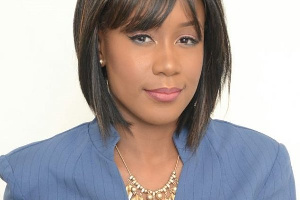 Amanda Clinton was a GFA presidential aspirant in 2019

Amanda Akuokor Clinton former Presidential aspirant of the Ghana Football Association (GFA) has said, Mr. Wilfred Osei Kwaku, popularly known as “Palmer” will not have spent much money pursuing a case against the GFA at the Court of Arbitration for Sports (CAS) if he wasn’t convinced about getting a good judgment.

For the past ten months, the Tema Youth President has been seeking justice at CAS after he was disqualified from the GFA presidential race last year by the Vetting Committee set up by the then Normalisation Committee (NC).

According to the Vetting Committee chaired by Mr. Frank Davies, he was disqualified on the count of failure to pay a 10% commission of two players, Gabriel Laveh and Joseph Painstil to the GFA as well as failing an integrity test.

Clinton, an International lawyer told the GNA Sports that, for Palmer to pay his fee of 22,000 Swiss francs and also pay on behalf of the GFA after they failed to pay theirs to CAS for the case to be heard indicated that, he had a good case to pursue.

She said “Wilfred Kwaku Osei has a case. He wouldn’t have spent much money by paying the fees of the GFA to pursue this case if he wasn’t convinced. Palmer has a case worth pursuing for at CAS.”

The verdict between the two parties which has been postponed earlier is fixed for Tuesday, September 1, 2020.

Aguero’s equaliser for City was his first goal since January and his 40th in the Champions LeagueManchester City made a winning start to their 10th attempt at winning the Champions League after fighting back to beat Porto.The Portuguese champions took a surprise early lead but Sergio Aguero quickly levelled from the spot and second-half goals…

How it started: Aguero (r) celebrates with Luis Garcia after scoring his first Champions League goal, which came for Atletico Madrid against PSV in September 2008 when he was 20Another match for Manchester City striker Sergio Aguero, another goalscoring milestone to celebrate.When the 32-year-old Argentina striker found the net with a penalty in Wednesday’s 3-1…

Soccer News of Thursday, 22 October 2020 Source: Ghana Soccernet 2020-10-22 The player altered his birth date, which from his previous club was 20th May, 1998 A former Okwahu United player, Felix Oppong has been banned and fines GH¢500 for falsifying documents in his application for free agency at the Player Status Committee.  The player […]