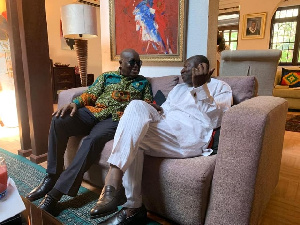 Governance think-tank, Alliance for Social Equity, and Public Accountability (ASEPA) has petitioned the Commission on Human Rights and Administrative Justice (CHRAJ) over what it says is the misappropriation of public funds, abuse of office and corruption by President Akufo-Addo.

In addition, it also filed an action of conflict of interest against Finance Minister, Ken Ofori-Atta and the Director of ‘I am for Nana campaign’.

“We write to your office Pursuant to Section 7(a)(e) of the CHRAJ Act to commence investigations into the KRL-NPP in which Public funds was allegedly used to pay for contracted private services rendered by KRL to the I am for Nana Foundation, a foundation created by the NPP to fund the 2016 campaign of President Akufo Addo,” the petition read in part.

According to the petition, an investigation carried out by an International Investigative Body, Open Sources Investigations, OSI revealed the details mentioned below.

I. That on the June, 2016, the American PR firm KRL was engaged by the I AM FOR NANA, FOUNDATION headed by Ken Ofori-Atta, (Ghana’s current finance Minister) to provide lobbying services to the NPP.

2. That among other services KRL was contracted to – support free and fair elections in Ghana in favor of President Akufo-Addo herein referred to as the first Respondent-advise the first Respondent on communication strategies ahead of the elections-provide lobbying services with the US Government, Donor Communities and the Media)-provide in Country support throughout the electoral process.

3. That after the elections and the first respondent assumed power, the arrangement with KRL was men regularized, providing same services at a cost of 5300,000 per annum excluding other miscellaneous… to President Akufo-Addo and his party the NPP.

4. That after the 20 I 7 regularization of the above arrangement, payments were made to KRL for the same services directly from the Office of the President wing State funds.

KRL has in a statement denied the allegations. It claims its current work was a different contract with the Finance Ministry.

It explains that it has been engaging stakeholders and media houses for the past three years and supporting the promotion of some government policies including the One District One Factory, Planting for Food and Jobs, and Ghana Beyond Aid initiatives.

A Member of Parliament’s Public Accounts Committee, Ras Mubarak, has welcomed the legal action by nine civil society groups against the Executive over the directive compelling the Auditor General, Daniel Yao Domelevo to proceed on leave. The Civil Society groups had petitioned President Akufo-Addo in July this year to rescind the decision, but their demands […]

MTN will, on Thursday, October 29 hold a virtual conference to discuss modern trends and innovative ideas that players in the creative arts industry can adopt to generate revenue within the digital space. At the conference, a panel of top international and locally-based professionals in the creative arts and entertainment industry will share their experiences […]

The President, Nana Addo Dankwa Akufo-Addo has condemned the recent clash that ensued between some members of the governing New Patriotic Party (NPP) and the opposition National Democratic Congress (NDC). According to him, violence does not have a place in the country’s politics. He thus urged residents of Odododiodoo and Ghanaians at large not to […]

A Member of Parliament’s Public Accounts Committee, Ras Mubarak, has welcomed the legal action by nine civil society groups against…