The Receiver of the defunct 347 Micro Finance Companies, 23 Savings and Loans and Finance House Companies, Eric Nana Nipah, says he is unable to undertake a detailed asset tracing of 35 resolved companies to enable him validate and settle claims of depositors under the Depositor Payment Scheme.

According to him, he is still working with the Economic and Organised Crime Office (“EOCO”) to locate and retrieve the manual and electronic books and records of these companies.

A statement issued by the Receiver explained that the 35 resolved companies have depositor claims worth approximately GHS252 million.

“At the commencement of the resolution process, there were 157 non-operational companies whose books and records we were not able to locate and secure. Based on the collaborative arrangement we have with the Economic and Organised Crime Office (“EOCO”) which includes assets tracing and investigations, over time, we have been able to retrieve books and records from 131 resolved entities which were not operational at the commencement of the resolution of these companies, thereby making it possible for us to be able to validate creditor claims on these institutions.

Currently there are 35 resolved companies with depositor claims worth approximately GHS252m which have no books or records available to us, to enable us to validate and settle these claims under the Depositor Payment Scheme. We are working with EOCO to locate and retrieve these companies records in order to be able to validate and settle depositor claims made on these companies,” he said.

Already the Receiver has announced that about 96% of those who are owed have already been paid.

According to him, the work done so far shows that the total value of valid claims is GHS 5.4 billion.

Mr. Nana Nipah added that about 98% of the claims will be paid in cash while the remaining two percent will be paid through a combination of cash and bond.

Below if a list of resolved companies the Receiver is yet to obtain books and records on, to enable the validation of creditor claims including depositor claims to be undertaken in the resolution exercise. 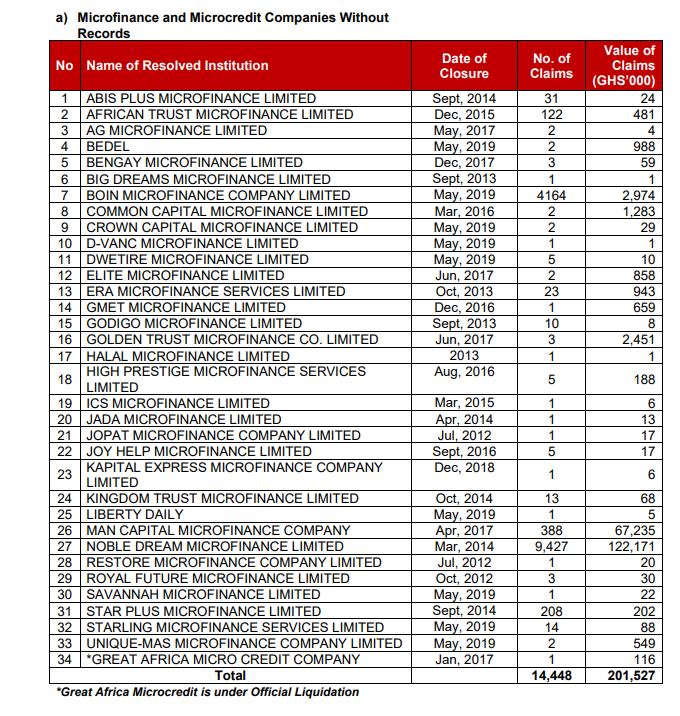