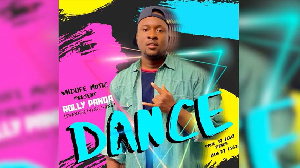 Ghana’s entertainment industry over the years has seen the demise of young and budding artists who worked hard but could not live to enjoy the fruits of their labout. The likes of Terry Bonchaka, Suzy Williams, Vybrant Faya and Ebony Reigns are but a few, who passed away at the prime of their careers.

The beginning of coronavirus pandemic saw the release of a viral song “Aunty Coro”, by Rolly Panda. This song dominated the airwaves both locally and international.

On Friday, August 22, Rolly was returning from a show. At about 12 am on the Teshie road, a group of young men tried to stop him. Sensing danger, Rolly decided to speed up for his safety. However, as he refused to stop, one of the young men chased after his car and this eventually led Rolly to veer off the road. In a couple of minutes after, the car engine was engulfed in fire.

Shocked and wound up about the turn of events, the “Aunty Coro “hitmaker tried exiting the car. Unfortunately, the doors had automatically locked up when the engine went up in smoke.

It took the bravery and strength of the young men, to break the car window and pull Rolly Panda out.

” I was still in shock, as I stood by and watched, while efforts were made to put out the fire” says Rolly.

After numerous efforts by the young men, the fire was finally contained.

With all the political and COVID-19 pressure, Rolly Panda felt the need to make the song danceable for his fans.

The Hitmaker, however cautions drivers to be vigilant when driving especially at night, in order to detect some of these emergencies.

In the meantime, while the cause of the fire is yet to be determined, “DANCE” is available on all music platforms.

Dance was Mixed and mastered and by Gigz and produced by Rolly Panda himself.

Entertainment of Wednesday, 30 September 2020 Source: www.ghanaweb.com 2020-09-30 The poster was meant for a scene in a movie Kumawood actor, Sekyere Amankwah, has asked Ghanaians to disregard reports of his demise since he is alive and not dead. Earlier this week, reports about the actor’s death went viral after his obituary surfaced on the […]

Entertainment of Tuesday, 29 September 2020 Source: 3 News 2020-09-29 Rapper, Amerado Ghanaian rap artiste Amerado Burner has stated that Nigerians do not come close to Ghanaians when it comes to rap music. The rapper was speaking to MzGee on the New Day on TV3 on Monday, September 28. The artiste, when asked who had […]

Ruff Town signee Wendy Addo, popularly known in the showbiz industry as Wendy Shay is once again in the news after sharing a new photo on social media. Source link Share this:

Entertainment of Sunday, 27 September 2020 Source: www.ghanaweb.com 2020-09-27 play videoThe host with his panelists on Bloggers’ Forum In the latest episode of Bloggers’ Forum, host Abrantepa sits with his panelists Arnold Asamoah-Baidoo and David Mawuli for a discussion. Publicity stunts have been a core marketing maneuver of bloggers in Ghana for some time now, […]