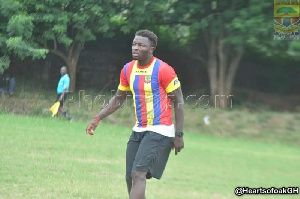 Former Black Stars midfielder, Sulley Ali Muntari, has stated that he’d love to retire at Asante Kotoko and would not rule out a move to Accra Hearts of Oak, RTU, King Faisal, or Liberty Professionals.

Muntari was heavily linked with a move to Accra Hearts of Oak in the March transfer window since he has been a long-time fan of the Phobians and has on some occasions trained with them.

The 35-year-old midfielder has been without a club following his exit from Spanish lower-tier team Albacete in June 2019, where he signed a six-month contract.

The former AC Milan star in his first-ever Instagram conversation with fans over the weekend answered that he would embrace to play for Asante Kotoko and not ruling out a transfer to Accra Hearts of Oak.

“I love Kotoko. They tried signing me when l was a young player in Kumasi”, he said.

In a separate interview with South African-based Metro FM, Muntari earlier affirmed that he has been following PSL side, Kaizer Chiefs, and will solely play for them if he’s making a move to South Africa.

Muntari launched his career with Liberty Professionals before breaking into Europe after signing for Serie A side, Udinese.

Sports News of Thursday, 1 October 2020 Source: Happy 98.9FM 2020-10-01 Patrick Razak Former Hearts of Oak winger Patrick Razak has been invited to train with the club by head coach Nii Odoom on Thursday as the Phobians begin their preparations ahead of the start of the new season in November. The 2018 WAFU winner […]

Achraf Hakimi wonât hold back on his ambition after a splendid start to his Inter career. âWe have the squad for the Scudetto.â The Nerazzurri are on full points after two games, beating Fiorentina 4-3 and Benevento 5-2.

Sports News of Wednesday, 30 September 2020 Source: footballghana.com 2020-09-30 Kotoko have commenced training for next season The Communications Director of Asante Kotoko, Moses Antwi-Benefo has revealed that there was no negative case at the end of the Coronavirus test for players, technical team members, and management of the club. The club in the last […]

Sports News of Wednesday, 30 September 2020 Source: Happy 98.9FM 2020-09-30 Ex-Hearts captain, Owusu Bempah Former Hearts of Oak captain Owusu Bempah has sent his message of condolence to the families of the young footballers killed in the bus accident at Offinso. The player who hails from the town where the accident occurred said he […]