At the event, he made a number of claims to suggest the government’s superior record compared to the record of the previous National Democratic Congress (NDC) led by President John Mahama.

Three of the claims have been fact-checked below:

Given the scope of the claim, we restricted its search to the top five countries in West Africa with significant infrastructural development on the African Development Bank’s 2019 Africa Infrastructure Development Index.

In Cabo Verde, we found no evidence of a four-tier interchange.

From The Gambia’s Ministry of Transport Works and Infrastructure, we confirmed that there is no 4-tier interchange in that country.

In Senegal, like Nigeria, although there are a number of interchanges, especially in Nigeria, none of them is four-tier.

In Ivory Coast as well, we found no four-level interchange although a number of major highways development projects have been initiated with funding from the African Development Bank.

After extensive exact Google searches, we did not find any evidence of a four-tier interchange in any other part of West Africa.

In another part of Africa, we, however, found a four-tier interchange in South Africa. The interchange is the EB Cloete Interchange near Durban in the KwaZulu-Natal province.

Based on the currently available evidence indicated above, we rate the claim that the Pokuase interchange is the first four-tier interchange in West Africa as true.

Claim 2: The cost of four interchanges being undertaken by the NPP government nearly equals the cost of one interchange constructed by the NDC government

The Vice President, in comparing the value-for-money ensured by the New Patriotic Party (NPP) government to what the NDC government did, said the cost of four interchanges Tema, Pokuase, Tamale, and Obetsebi Lamptey interchanges cost $289 million while the Kwame Nkrumah Circle interchange alone cost $260 million.

“Ladies and gentlemen, It is important to note that the cost of the Tema, Pokuase, Tamale, and Obetsebi Lamptey interchanges total $289 million while the Kwame Nkrumah interchange was constructed at a cost of $260 million,” Bawumia said.

To verify this claim, we highlight below the cost of the various projects in question and their scopes and analyse them subsequently.

In 2013, the National Democratic Congress (NDC) government awarded a contract to Brazilian firm, Queiroz Galvao Construcao, for the design and construction of an interchange at the Kwame Nkrumah Circle in Accra. It was worth €74.8 million ($100 million) and parliamentary approval was duly granted it in 2012.

Another project which was a flyover to be constructed on the Ring Road leading to Kwame Nkrumah Circle by the same Brazilian contractor was approved at a cost of $170 million.

Both projects amounted to $270million.

For the Ringroad flyover, the scope, as captured in the report of the Parliamentary select committee on roads is as follows, 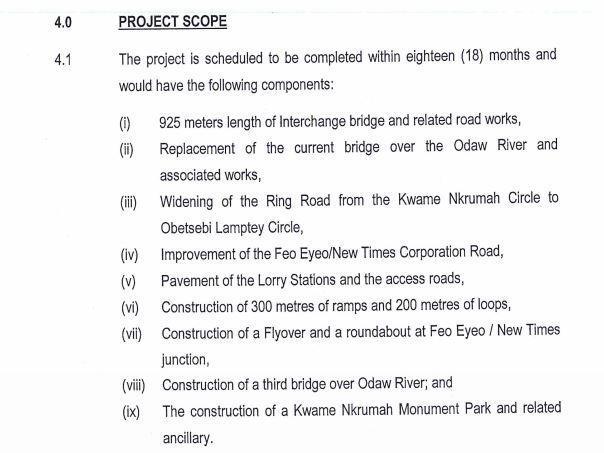 On April 10, 2019, President Akufo-Addo cut sod for construction work to begin on the Tamale interchange project which is being executed under the $2 billion China Synohydro deal.

According to a report by the Roads and Transport Committee of Parliament, the original project cost is $35 million. However, the cost including deferred payment amounts to $46 million.

“The scope of work includes bridge/ramps and slip roads as well as a carriageway of a width of 7 meters with a 2×2 number of lanes,” the report indicates.

The Obetsebi Lamptey interchanges project was commenced in 2019 after President Akufo-Addo broke the grounds for work to start in October.

The project report by Parliament’s roads and transport committee showed that it is to cost €87 million ($135 million). The three-tier interchange is to have an East-West flyover and another flyover on the Ring Road West. 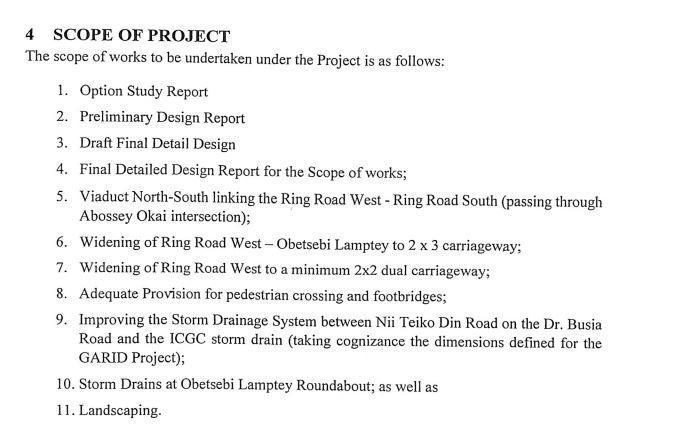 The Government of Ghana secured funding from the African Development Bank (AfDB) for the construction of the 3-tier Pokuase interchange in Accra at a cost of $94million.

AfDB was to provide about $83million of the funds while the Government of Ghana provided $11.7million. The project, which is being executed by Zhongmei Engineering Group Limited under the Accra Urban Transport Project (AUTP), began in 2018.

The project was later redesigned into a 4-tier interchange.

The scope of the project includes 4-Tier Stack Interchange at Pokuase as well as the Construction of Storm Drains. There will also be the construction of 10km of Local Roads, construction of 6.6km of Awoshie-Pokuase-Kwabenya Road, the widening of 2.0km of Accra-Kumasi Road, provision of pedestrian facilities including walkways, footbridges, signalized crossings, Streetlights, and free health screening exercises for communities within the project catchment.

Vice President Dr Mahamadu Bawumia in July 2018 cut sod for the construction of the Tema interchange.

The project cost is $57 million and was funded by the Japanese government through the Japanese International Cooperation Agency (JICA).

The first phase of the project has been completed.

The project involved the conversion of the Tema motorway roundabout into an interchange and extended for some 500 metres from the roundabout to the Ashaiman Timber Market Roundabout, 400 metres along the Aflao road, 300 metres towards the Tema Harbour and about 300 metres to join the main Tema-Accra Motorway.

The second phase of the project, which is the construction of a tiered flyover including detailed design and construction supervision, is yet to be completed.

The sum of all four projects by the NPP government is $321 million, according to documentary evidence we found, contrary to the $280 million claimed by Dr Bawumia.

However, drawing a conclusion based on the project cost alone to make claims of no value for money ignores other critical information such as the scope of the projects in question.

A civil engineer, Abdulai Mahama, says there are many elements that go into the cost of construction projects hence it is unfair to compare similar projects solely based on contract sums.

“You can never be fair with that analysis. When you are dealing with a road construction, [and you are constructing] a 1 kilometer road for instance from Circle towards Nima police station, and you are doing the same 1 kilometer from Circle to Alajo, the cost will vary especially because of the nature of the soil and the built environment.”

He cites depth of excavation, type of soil, built environment; demolishing and compensations, and materials used as some critical factors that affect the cost of construction projects.

“For some of the soil nature, when you are supposed to improve upon their stability, it can cost about 30 percent of the total cost of the project so if Tamale Interchange is on a very firm ground and Circle due to floods is on unsuitable ground, the costs will differ,” he says.

From the above information, the scope of each project varies and will need to be assessed in detail to be able to make a fair comparison and definite conclusion on claims of no value for money.

We, therefore, rate this claim as misleading.

Verdict: Over generalised and non-contextual.

The Vice President after highlighting the various projects initiated by the Akufo-Addo government in different sectors including health, agriculture, education and sports, said his government’s achievement is incomparable to what has been achieved in the first term of all other governments in the fourth republic.

“Ladies and Gentlemen, notwithstanding the impact of the COVID-19 pandemic on the completion times of some projects, the data indicates that in the fourth republic, no government has achieved as much in its first term of office in terms of infrastructure projects it initiated as the first term of the NPP government of Nana Addo Dankwa Akufo-Addo,” Dr Bawumia said.

The spokesperson for the Vice President, Dr Gideon Boako in clarifying the claim during an interview on Citi TV’s Point of View on Wednesday 19, 2020, said the claim was made without direct comparison to any specific government

“We have put out what we think represents the superior records of any government in the first term. If there is any previous government or anybody that feels that what we are saying is not true and in comparative terms stands a better position to produce results that appears more convincing and robust than the argument we are making, we welcome it and we want that to be shown so that the Ghanaian people can also see,” he said.

Below is the breakdown of all presidents in the fourth republic.

Given that this claim was not made against any benchmarks or any independent index or source, it cannot be verified.

It will require more context to verify.

–
The reporter, Jonas Nyabor, produced this fact-check under the auspices of the Dubawa 2020 Fellowship in partnership with Citinewsroom to facilitate the ethos of “truth” in journalism and to enhance media literacy in the country.

Ecobank, in partnership with the Registrar General, has sensitised businesses on the Companies Re-registration Directive by the Registrar General’s Department to drive compliance. The event, which was held virtually on Wednesday, September 16, 2020 for over 2,000 participants, is part of the bank’s efforts to support and provide convenient solutions to businesses through leveraging strategic […]