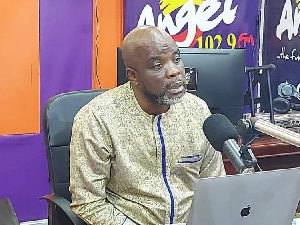 Disgruntled member of the Ghana Football Association Wilfred Osei Kwaku Palmer has dared the GFA to drag him to court over his allegation that the new administration has spent GHC40million on various projects since assuming power.

A GFA document, sent to members of the association as part of the upcoming Congress indicated that the FA had budgeted the said amount as expenditure for a year.

The amount included estimation on staff salaries, expenditure on competitions, remuneration of Executive Council members among others.

But in an interview with Angel FM, Palmer espoused that the document should have been tagged us financial report instead of budget. He claimed that the FA has spent the amount and are trying to conceal it with the excuse that it is a budget.

Palmer also accused the FA of dabbling in falsehood and propaganda.

“GFA has blown GHC40million and this is because you can’t have a budget where certain expenditures have been spent and the others are not spent. They anticipated that there will be sponsorship of GHC17.5million. They anticipated FIFA grant, affiliation fee, government grant and the others. In the FIFA grant they said $250,000 and they claim it’s because of Kurt’s visit. It’s propaganda. FIFA doesn’t work like that”.

“I challenge them to take me to court. I’m telling the clubs that their monies have come and they are trying to claim credit for it. The monies belong to us the clubs”, he said.

Palmer is currently contesting the legitimacy of the current leadership of the FA at the Court of Arbitration for Sports.

He was found guilty of breaking GFA codes and was thus prevented from contesting the elections that saw the arrival of Kurt Okraku and eleven other Executive Council members.

CAS has set September 1, 2020 as the day it will announce its judgment.

Luis Muriel ensured Atalanta got back on track with an early brace, as they beat Crotone 2-1, but the hosts will rue missed opportunities. The Colombia international only played 45 minutes, but made a big impact, twice piercing Alex Cordazâs goal.

Amongst those who starred for Milan Thursday evening in a 3-0 Europa League over Sparta Prague, it was Ismael Bennacer who shone the brightest, writes Matthew Santangelo.

Claudio Marchisio trusts Andrea Pirlo âis the right manâ for Juventus, although he will need time, and they remain âsuperiorâ to Scudetto challengers Inter. The former midfielder spoke to La Gazzetta dello Sport and you can read the rest of his comm…

In today’s edition of FamLife with Leticia Ohene Effah and her panellists; discuss ‘The role of a good spouse in…

Sean Connery, the Scottish actor best known for his portrayal of James Bond, has died aged 90. His son, Jason,…

A journalist, Manasseh Azure Awuni has commended the president, Nana Addo Dankwa Akufo-Addo for terminating the appointment of the Chief…

Customers of defunct gold dealership firm, Menzgold on Saturday morning massed up in front of Zylofon Media in Accra to…

Philip Walton, an American citizen, was abducted from a village in Niger by armed men on Monday. Source link

Accra, Ghana — In 1965, Kwame Nkrumah described the paradox of neocolonialism in Africa, in which "the soil continue to…

John Magufuli is re-elected by a landslide - but the opposition has dismissed the results. Source link

"Kenneth", which is a pseudonym to protect the identity of his family back home, had been involved in a peaceful…

A selection of the week's best photos from across the continent and beyond. Source link

Three people from around the world who lost their jobs during the pandemic explain how it has affected their lives.…