China’s foreign minister Wang Yi met with Zimbabwe President Emmerson Mnangagwa during his visit to the southern African country as part of his Africa tour.

Relations between the two countries has been strong as Harare continues to look East with biting sanctions from the West – the European Union and the united States.

Despite being on vacation, President Mnangagwa made time to meet with the Chinese diplomat stressing after their meeting that relations were growing stronger.

The president did not reveal the new financial assistance but but hailed China and Zimbabwe’s “win-win cooperation in infrastructure, agriculture, and mining” and vowed to explore new areas of cooperation. 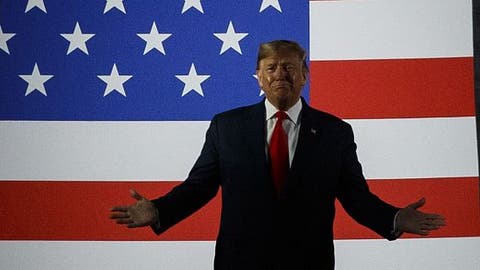 Ethiopia’s prime minister Abiy Ahmed has advised US president Donald Trump to direct his complaints about not winning the Nobel Peace Prize to the awards committee in Oslo.

Abiy in December 2019 received the 2019 Nobel Peace Prize for his role in the 2018 Ethiopia – Eritrea peace deal and reforms back home.

At a rally in Ohio on January 9, 2020, Trump said the leader of one of the country’s had been awarded a Nobel Peace Prize after he (Trump) had made a deal and saved a country.

I said… what the… did I have something to do with it? Yeah. But you know that’s the way it is. As long as we know that’s all that matters. I saved a big war, I saved a couple of them.

Abiy’s acceptance of a border ruling and offer of peace to Eritrea was received by Eritrea’s Isaias Afwerki with both countries closing the chapter on two-decades of a standoff.

Many analysts in the region had mentioned the involvement of foreign nations in bringing about reconciliation. The Gulf states – especially Saudi Arabia and the United Arab Emirates – were routinely mentioned as key backers of the deal. Both countries have awarded Gold Medals to Abiy and Afwerki after the deal.

In response to Trump’s claims of deserving the Peace Prize, Abiy told journalists in South Africa

‘‘To be honest, I am not aware of the criteria used to select winners of the prize, so Trump’s complaint must go to the Nobel Prize Committee in Oslo, not Ethiopia,’‘ Abiy said at a joint press briefing with South Africa’s president Cyril Ramaphosa.

‘‘I am not working for the prize, I am working for peace which is a very critical thing for our region.’

Trump’s disclosure that he played a hand in the latest Nobel Peace Prize by ‘saving a country’ went viral last week.

“I said… what the… did I have something to do with it? Yeah. But you know that’s the way it is. As long as we know that’s all that matters. I saved a big war, I saved a couple of them,” he added as supporters cheered him.

Many Ethiopians were puzzled by Trump’s remarks. Some said his talk of a deal must have referred to the new peace with Eritrea.

But one senior Ethiopian official told The Associated Press the remarks referred to preventing further tensions between Ethiopia and Egypt over a massive dam that Ethiopia is completing on the Nile river. Egypt says the dam threatens its water supply. Ethiopia says it’s needed for development.

Ministers from the countries, plus Sudan, are expected to meet in Washington on Monday to report on the failure of their latest round of talks.

“He was talking about Egypt and Ethiopia,” the official with Ethiopia’s foreign ministry said. He spoke on condition of anonymity because he was not authorized to speak to the media on the matter.

The official asserted that Egypt’s president lobbied Trump over the disputed dam project, leading to the U.S. taking a role in the discussions.

“President Trump really believes he avoided a war as such … but that was not the case,” the official said. 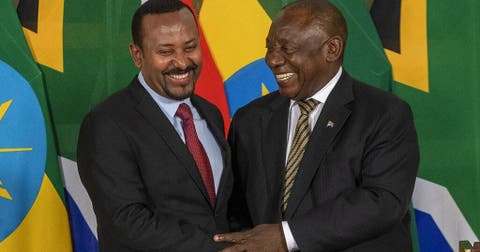 Ethiopia’s prime minister Abiy Ahmed took advantage of his visit to South Africa to ask for President Cyril Ramaphosa’s help in his country’s dispute with Egypt over a massive dam project on the Nile River.

Talks last week among Ethiopia, Egypt and Sudan failed to reach a consensus on technical issues, including the filling of the $4.6 billion Grand Ethiopian Renaissance Dam. “Ethiopia always believes in a win-win approach with Egypt and the Sudan.

“And we are following the same track in the kind request for President Ramaphosa as he is a good friend for both Ethiopia and Egypt, also as incoming AU (Africa Union) chair, he can make a discussion between both parties so as to solve the issue peacefully,” Abiy said at a press briefing.

In his response, Ramaphosa told reporters he had already raised the matter with the Egyptian president.

The water ministers of Ethiopia, Sudan and Egypt are expected to meet again Monday in Washington to report on their progress. Egypt fears that the dam will cut its share of water from the Nile.

Apple issues a revenue warning due to the coronavirus; The Boy Scouts of America files for bankruptcy

Wendy Williams is facing backlash after she seemingly mocked the death of Dr. Amie Harwick during the “Hot Topics” segment of her talk show. Harwick, a Los Angeles family therapist, was previously engaged to “Price is Right” host Drew Carey. Harwick, 38, was…

The San Francisco Giants decided to snub former first baseman Aubrey Huff from its 2010 World Series-winning team reunion planned for this summer because of his social media posts. Huff, 43, played for the Giants in 2010 when the team won the World Series. H…

The commission of inquiry into state capture has heard that Dudu Myeni’s son, Thalente, used the business bank account of a witness who is testifying in-camera to send money to his mother. Myeni’s corporation, Premier Attraction 1 016 CC,  sent three payment…

ICYMI:  SONA 2020 | Groans, delays, an EFF walkout and a surprise vacant seat  The EFF came into the National Assembly chamber singing, all wearing more or less the same outfits, led by their “commander-in-chief” Julius Malema. By that time most of the othe…

In the recent movie “Harriet,” the renowned Underground Railroad conductor Harriet Tubman is depicted offering a simple explanation for her astounding success leading slaves north to freedom. “I went down south and brought them back,” she states. “God showed…